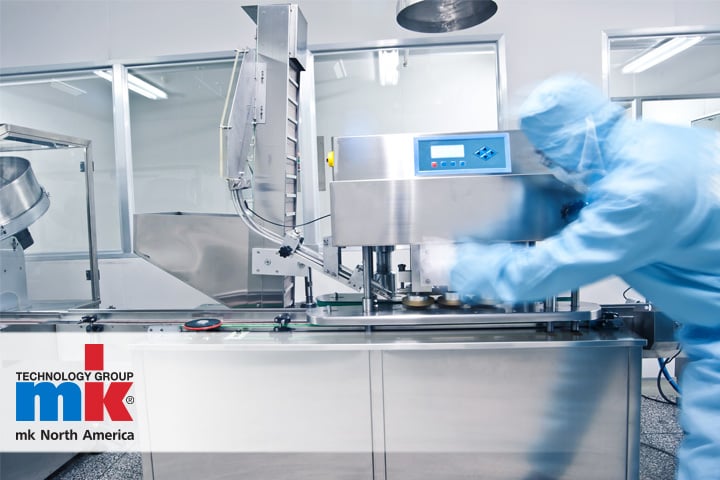 Modern cleanroom conveyors have much in common with other conveyor systems, with a focus on versatility, energy efficiency, and modular design to allow for flexibility and easy reconfiguration of production processes. Depending on the specific needs and/or clean room standards of a given application, standard stainless steel or aluminum conveyors may be adequate. However, more restrictive industries like semiconductor or solar panel manufacturing might require something more specialized.

No matter what your industry, if you need a conveyor for a cleanroom with a class of between 100,000 and 1,000, mk North America specializes in conveyor systems to meet almost any application. Contact mk by calling (860) 769-5500 or by using this online form, and keep reading to learn more about the benefits of mk automation for cleanroom applications.

When deciding on and installing a conveyor system for industrial cleanrooms, there are a number of crucial considerations to be taken into account. Two of the most important of these are flexibility and, of course, clean room classification.

Flexibility in cleanroom conveyor systems means a system that is capable of handling numerous tasks, and of being reconfigured to meet new production needs. This might mean certain aspects or stages of the production process might need to be suddenly isolated or integrated with new or shifting requirements for cleanliness or other standards. In cases such as this modular conveyors like those offered by mk are critical.

Cleanroom Requirements in the United States

Cleanroom class requirements in the United States are based on the number of allowable particles 0.5 micrometers in diameter per cubic foot of air, ranging from class 100,000 to class 1 (the very cleanest class). This system is known as Federal Standard 209E. Cleanroom conveyors are rated to a class corresponding with the class of cleanroom for which they’re appropriate. When choosing a conveyor for any cleanroom process, it’s extremely important to get a system with a cleanroom rating at least as strict as the environment for which it’s intended. For example, a conveyor with a cleanroom rating of 100,000 might not be appropriate for use in a class 1,000 cleanroom. However, it may sometimes be wise get a conveyor with a higher rating than is necessary, in the event of future upgrades in clean environment ratings.

Aluminum conveyors from mk, like the versatile GUF-P 2000 low profile system, are made with modular designs from versatile mk extruded aluminum profiles. mk’s aluminum conveyor systems are extremely adaptable and perfect for easy reconfiguration of production processes. Aluminum and steel system are each available in a variety of sizes with a wide array of belting options.

Get in touch to learn more today.