Over Under Conveyor Systems – TKU and SPU 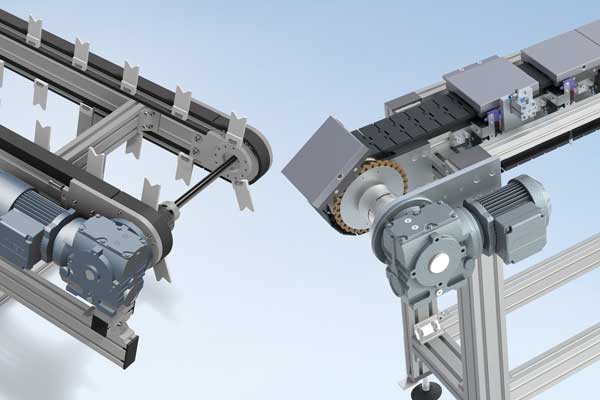 Back in 2016, we looked at over under conveyor systems using mk belt and high-load conveyors. But times have changed, and new technologies have been developed. In this article, we’ll explore two of these newer conveyor types, learn their differences and similarities and see how they stack-up against more traditional over under conveyor models.

Over under conveyors feature, typically two, conveyors stacked on top of each other running in opposing directions. These conveyors usually have elevators, or vertical transfer units, on one or both ends. When carrying product directly on the conveyor, and that product needs to return back to the other end of the conveyor line, the over under conveyor systems previously discussed are absolutely the best solution.

But what about applications where the part is an irregular shape and needs to be carried pallet or puck? Then pallet-handling conveyors are exactly what you need. mk North America’s VersaMove line is specially designed for the workpiece pallet-handling conveyor sector. Within VersaMove there are several options for over under conveyor systems. However, all these systems require the use of vertical transfer units (VTUs). And while there is no arguing the importance of VTUs in industrial automation, there are other, more cost-effective, compact, and greener solutions available for over under conveyor systems.

Two of these solutions available from mk are the TKU 2040 and the SPU 2040. Or in layman’s terms - a “Fixtured Indexing Attachment Chain Conveyor” and an “Over Under Recirculating Pallet Conveyor System.” Let’s break these units down to better understand what they are and where to use them.

The TKU 2040 is the ideal conveyor for when a product is placed on a carrier at one end of the conveyor and removed from the carrier at the other end; without needing to allow for product accumulation. The carrier then returns along the underside of the conveyor and back to the load position. This conveyor can run continuously or be indexed (cycled) on demand. The Fixtured Indexing Attachment Chain Conveyor is a synchronous conveyor system, meaning the motion of individual pallets cannot be controlled; which isn’t a bad thing it’s just the opposite of asynchronous conveyor systems – which we’ll get into shortly.

The TKU 2040 can be outfitted with V-blocks for carrying cylindrical parts or with pallets for carrying nearly everything else. One of the unique and premiere features of this conveyor, when outfitted with the V-blocks, is this conveyor’s ability to be provided with adjustable width. This means a single conveyor can carry a wide variety of part sizes, and change over from one part to the next is simple and fast, thanks to the ingenious options for width adjustment from mk.

Over Under Recirculating Pallet Conveyor System or SPU 2040

So, what makes these over under conveyors more cost-effective, compact, and greener? Their ability to return pallets without the use of VTUs. Removing the VTUs from an over under system reduces the total number of components – which brings costs down as well as reduces the footprint. For example, a pallet that is 400 mm long would require a VTU of approximately 1,000 mm with two of these on the system that’s a space savings of 2,000 mm (6.6-ft). These solutions are greener because they consume less energy – these over under systems only require one motor, whereas a standard over under system would require three or four or more motors. And once again, the system is more cost-effective because there are far fewer motors which also translates to less complex controls and less peripheral equipment.